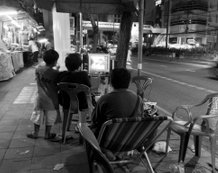 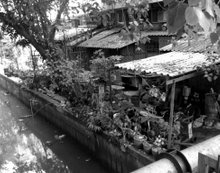 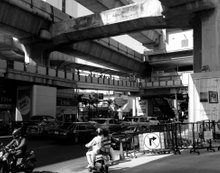 In working with the urban space at home , there is widespread agreement on the experience and commercial components required to provide a public space quality and rich experience . Attitudes towards the urban space layout reveals our special mix of capitalism with a human face, and a stable quality gun . But one must not far beyond Europe's borders before the dogma does not apply .

A simple walk along Bangkok's Sukhumvit Road , which is the most dynamic and commercial place in Thailand (maybe even in Southeast Asia) clearly show that the qualities that we Western Europeans regard as particularly important , such as reflection, slowness , history, and ultimately democracy does not apply at all as parameters in the planning of urban spaces aesthetics and their infrastructure.

Here is the direct human consumption and the highest consumption rate that is critical to the urban space design -ing . The battle to offer the highest consumption experience on its own land in competition with the other landowners put the horizons of what can be done in the public domain . Art can be very good in urban areas , but only if it can promote the consumption experience.
The bench in the sun is obviously out of the picture in a country with 35 degrees on average, and with a social structure that requires the individual that he / she works so long as they can stand on their feet .

And yet give the city a great and intense spatial experience . Where do otherwise roads and trains cross the city spaces stacked on top of each other in several storeys high . And where else can you find huge shoppingmalls in such large quantities , linked by walkways , the passages and tunnels that you can live a parallel life to shopping centers, indoor streets and squares, without ever hitting a public road or place, and without to leave the consumption space.

Recreational city life is not found in Bangkok. At least if one understands rekreativitet as a non- purposeful behavior or a quiet, distracted Nydén of the environment , which has been previously furnished with aesthetic effects that encourage calm and rekreationen .
And yet there are countless situations where the street's inhabitants in town indulge in recreational activities. Everywhere one sees sleeping , eating , resting , children appropriate , talkative people in the middle of the hysterical commercial and traffic inferno . Their recreational aktiviktet is just not linked to aesthetics. The space they occupy for their recreational purposes is not prepared for it by architects , designers and artists , but rather remaining space in the city's turmoil . And very often it is the room where we, as Europeans would never dream of beating us down. As for example the situation where people find their rest and reflect on the central reservation of the 6 -lane road under the bridge (because you can sit dry during the frequent rains ) , or by the roadside while trying to sell three durians dealing with home.

This does not mean that aesthetics is not necessary, for indeed it is more than ever. But perhaps one could imagine the tense harder cart. Is it really the case that the aesthetically beautiful and worked through urban space is reserved for leisure activities ? Can you imagine that planners, architects and artists came out of the ivory tower and went in direct contract with the arts foreign non- recreational part of life , so also the space could be allocated to a quality?

Although Bangkok has 15 million people and a medium- long history , the city is exhausted experiential for two - three days if one does not have a special preference for consumer goods. You will not find so many layers of history in the urban space . Maybe it's because the historical urban spaces and buildings in Thailand was built of wood in the past, and therefore has disappeared, to the historical plays so retracted a role. ( A European pallet is eaten by termites in three months, so only the seams are left. ) Is it because there is no attention to the qualities of the old urban space - perhaps they are too far from modernity , it is so important to take over from the Western world . Or is it because the visual arts and literature in this part of the world has not lowered his veil of picturesque decay over the harsh realities of the struggle for existence ?
The many layers of experience missing anyway.

If we turn our attention to Europe, it is certain that fex . artists of the last century in our continent managed to give the struggle for existence a conciliatory ethnic / picturesque character , as they amply for example, depicted poor Italian peasants everyday wear. And to a degree where we even 150 years after still think a little on the myth of the cheerful , temperamental fattigrøv . And the constant cultural adaptation of urban spaces has given us a depth of experience that in many ways resembles humbles great experience of nature .

So there is probably something that the memory traces and residues from historical periods and artistic working of them , we as Europeans shelves as important entities actually have a meaning in moderation and intensification of urban space.
It is not because the Asian metropolis is devoid of aesthetic deals. There are plenty of aesthetic statements in the urban space . But all terms associated with consumption of individual goods and to the individual. Everywhere in urban spaces is one able to deliver any European design object from Balenciaga Bags for Eames chairs . From street vendor copy items to floor in the mall where you can walk in off the street and buy a Ferrari or a Lamborghini .

But there is no notion of the " intent solve " aesthetic object. And you experience no conception of the relationship between aesthetics and thought - or rather, aesthetics and community. Anyone can carve out its own aesthetic universe from a fixed set of brands, but do not relate to others. The traffic space is a public concern , but urban spaces aesthetic design is handed over to private enterprise .
It is hardly an example to design cities with Bangkok ( and other Asian cities) as a model . But it is an eye opener as to what happens if we simply indulge in the design and aesthetics, whose main intention is to get money out of his pocket on us ( As the American image artist Trueism reads: " In the shop , Therefor I am " )

Art and architecture is when it succeeds just aesthetics without consumption ulterior motive . A refuge for the body and the tank.